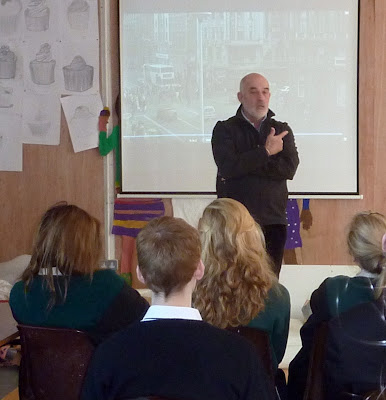 Yesterday, Form IV Art pupils were treated to a talk by OC Peter Robertson on the film 'Inside I'm Dancing', a film which the Form IV are currently studying. Peter Robertson was the director of photography on this film and his talk included explanations about specific scenes within the film as well as movie making in general. He spoke of the importance of the relationship between the director and the cinematographer. The Form IV found the lecture to be most informative and very enjoyable.
Posted by sccart at 13:13

Life sketching is an integral part of the Leaving Certificate curriculum. Form VI pupils take time once a week to practise this section of the curriculum to ensure they do not lose momentum.  Posted today are examples of some gesture drawing by Ciara O Byrne and Henry Roe.

Term began two days ago and posted below are some examples of finished prints from last term by Form I pupils.
There is lots to look forward to this term in the Art Department including the annual art prize eveing which will be judged this year by the artist Una Sealy.