Form VI pupils are close to completing their craftwork brief for clay models. Below is work by Lauren Cooke and Poppy Vernon. Their preparatory studies for this project can be viewed HERE. 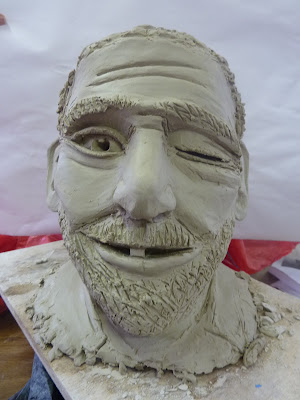 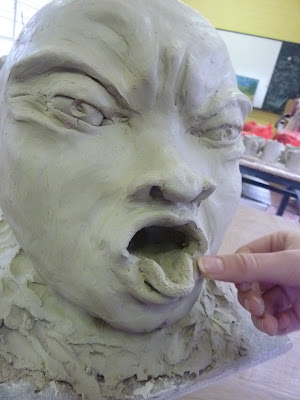 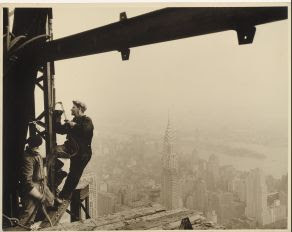 Yesterday, Senior Cycle pupils studying Art visited IMMA to view an exhibition of Photographs entitled 'Picturing New York: Photographs from The Museum of Modern Art'. Click HERE for full details on this exhibition. Some of the photographers whose work appears in the exhibition include Berenice Abbot, Diane Arbus, Garry Winogrand and Cindy Sherman. 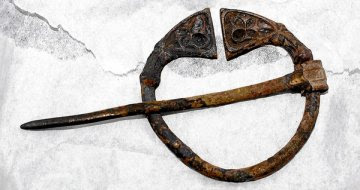 'A 1,400-YEAR-OLD brooch dating from the early Christian period has been discovered in the remnants of a turf fire in a range in north Kerry' writes ANNE LUCEY in yesterdays Irish Times.

It is believed the brooch fastened the cloak of a clergyman and was dropped, probably on a forest road which later became bog. It ended up in a sod of turf in the range of Sheila and Pat Joe Edgeworth at Martara, Ballylongford, near the Shannon estuary. Lands alongside the Shannon are chequered with early Christian ruins and holy wells.

The bronze brooch was found shortly before Christmas by Ms Edgeworth when she was cleaning out her range.The turf had been cut by machine and drawn from the Edgeworths’ bog at nearby Tullahennel last summer.The find has been hailed by archaeologists as most exciting.

Known by archaeologists as a “zoomorphic penannular brooch”, it is a type that was developed in Ireland in the sixth and seventh centuries following earlier examples from Roman Britain. The Tullahennel brooch is “particularly interesting” because it is decorated on its terminals with two crosses, meaning that at the very least its original owner was a Christian, and most likely a member of the clergy, said Griffin Murray, collections officer at Kerry County Museum.

“Stylistically the brooch can be dated to around AD 600. It is a rare example of a piece of jewellery belonging to one of the earliest Christians in Ireland, only a generation after St Brendan. For that reason, it is a very exciting find,” Mr Murray said.

The brooch is the latest in a number of early finds – including a hoard of Viking silver – which have been acquired under the National Monuments Act by the Kerry Museum in Tralee. Undergoing conservation, it is due to go on permanent exhibition in the next couple of months. Click Here to read the full article

One of the best known penannular brooches ever found in Ireland is the Tara Brooch, circa 700AD (see below). 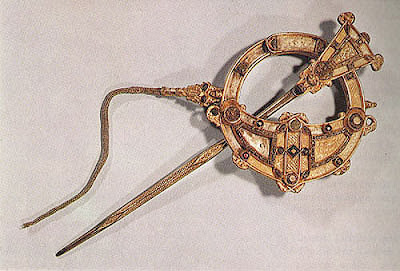 Labels: In the News - Art 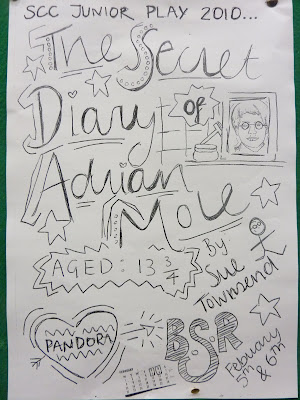 Tonight sees the dress rehersal for the 2010 Junior Play, 'The Secret Diary of Adrian Mole Aged 13 3/4'.  The programme (see above) designed by Aoise Keogan- Nooshabadi in Form IV, draws inspiration from previous art-work on bookcovers for this piece of comic fiction.
Main Performances are on Friday 5th and Saturday 6th of February at 7pm in the B.S.R.
Posted by sccart at 08:29 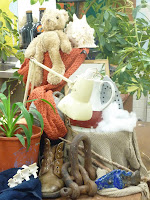 Form V Q-Set got a head start on their still-life compositions during evening activities last Saturday. The pupils created the still-life themselves and prepared boards upon which to draw and paint. Having planned out their compositions, their brief is to execute a large-scale painting  based on all,or part of the still-life arrangement. 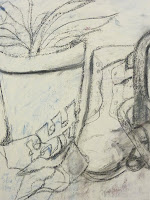 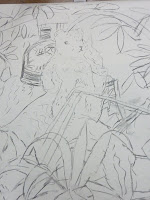 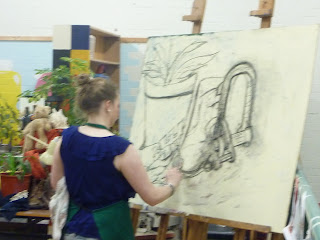 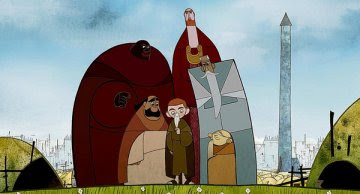 Irish animation earns its keep with revenues of over €40m, writes PAMELA DUNCAN in the Irish Times today.
IRISH ANIMATORS are continuing to draw international attention with two Irish animated films on the shortlist for Oscar nomination, and two more shown at Sundance Film Festival.
The Secret of Kells has made the last 16 in the animated feature film section at the Oscars, while Granny O’Grimm’s Sleeping Beauty has been shortlisted for nomination in the animated short film category. The final five nominations in each category are to be announced tomorrow. Old Fangs, produced by Kilkenny company Cartoon Saloon, and Please Say Something , directed by David O’Reilly, also from Kilkenny, were both shown at Sundance.
But aside from earning plaudits, the Irish animation sector is also earning its keep. Dubbed the “star performer” of the film and TV industry in this year’s report of the Audiovisual Federation, the sector’s total output reached €38.9 million in 2008, with €43 million estimated for 2009. Animation is the only independent audiovisual sector which predicts growth this year. It is now the largest provider of full-time employment in the Irish independent film and television sector, with 337 jobs in 2008.
Kevin Moriarty, chairman of the Audiovisual Federation steering committee, says that the animation industry is a perfect example of the smart economy.
There are innate advantages to animation. Firstly, there is a wide audience given that animation is easily dubbed into other languages. Good for employees is that it takes time: 30 seconds of animation can take a week. “The gestation period for productions can be one, two or three years – so . . . people have regular employment,” Moriarty says.
Click HERE to read the rest of this article.
Star studios: top producers
Brown Bag Films
Best known for Oscar-nominated short Give Up Yer Aul Sins . Successful TV series include Olivia for US Nickelodeon and Noddy in Toyland .
Cartoon Saloon
Producer of the Year at Cartoon Forum in 2008 and Producer of the Year at Cartoon Movie in 2009. Tomm Moore, director of The Secret of Kells , was named Director of the Year at Cartoon Movie in 2009. The Secret is one of two 2D films on the shortlist for nomination in the animated feature film category for the Oscars. The studio’s Skunk Fu! series has been broadcast in over 120 countries.
JAM Media
Achieved critical acclaim with the BBC series Roy , which centres on the trials and tribulations of a cartoon boy who lives in the real world. The series was born out of a short called Badly Drawn Roy .
Barley Films
Currently working on a feature length animation, Little Caribou .
Kavaleer
Series Garth and Bev is broadcast on CBeebies. The company has just signed a deal with Yowza to bring Mort Walker’s comic strip Hi Lois to the small screen.
Monster Animation
Series Ballybraddan was launched on RTÉ in 2009. Its Fluffy Gardens series was a global success.
Magma Films
Niko and the Stars was distributed worldwide.
Posted by sccart at 09:02